This past Friday, Dec. 3, I attended UR’s annual Holiday Shopping Fair for the first time. As someone who loves attending the Lucky Flea Market, I knew I had to head over after my morning class.  The fair ran from 10 a.m. to 4 p.m. and featured 22 local small businesses selling handcrafted goods such as jewelry, woodworking pieces, soap, and adorable crocheted animals.

The first table that caught my eye was adorned with vintage coins from around the world, something I was definitely not expecting to see here. The table was run by two members of the Ontario County Coin Club. They said that the wife of a deceased member donated his collection to the club, and they are now selling them to support their activities, which I can only assume involves buying new (but different?) coins. It was certainly an impressive collection that took up the entire table with coins from as far away as the Solomon Islands. 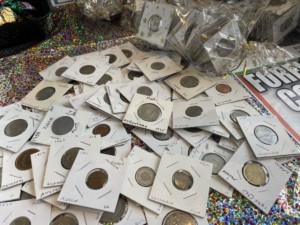 The other booth I spent some time at was Unstrung Studios, which featured wood burning art, also known as pyrography. Megan, the owner, told me that this has recently become her full time job after leaving her previous role as an occupational therapist. She still puts her anatomy knowledge to good use, though, as many of her designs are centered around different body parts such as the skeleton, brain, heart, and uterus. In addition to her anatomy themed work, she also had a small collection of funny candy heart-esque pins with phrases that she and her husband have said to each other. Sayings include “UR NOT THE WORST,” “U SMELL OK,” and “U R OKAY.” She said she didn’t realize until after she started making them that they were a perfect fit for selling at the University, a culture which, as we all know, is obsessed with including UR in any phrase it can.

I only recognized one vendor from my many trips to the Lucky Flea, which was UR’s student run shop, ShopEmilyEvelyne. It’s run by UR junior Emily Bingham, and she came prepared with a very fun and glitter-adorned table painted in vibrant colors. She was also the only vendor selling clothing items that I saw. I already own a cowboy worm crop top from her store, and it was cool to see how she’s expanded her offerings to include new products, such as decorated mirrors and tumblers.

I only ended up purchasing one item (a pin from Unstrung Threads), but I had fun wandering around Hirst Lounge for about 20 minutes. I’ve already done most of my Christmas shopping, but I think this was a great opportunity for students to easily access some high-quality handcrafted goods that would make great gifts for relatives and friends. One of the challenges of being a student without a car at UR is that it’s difficult to go shopping anywhere besides the two Green Line shuttle stops of Marketplace Mall and Pittsford Plaza. It’s nice that the University made shopping local more accessible to students, especially as UR can be a bit of a bubble. I hope they continue to do so to encourage interaction between non-local students and Rochester natives.