ITS, beloved study space, dies at 48 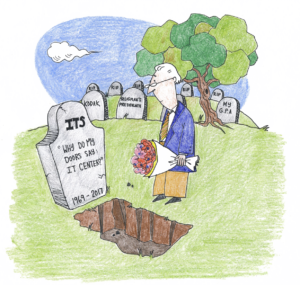 It was just another Saturday afternoon. Students labored away, studying for finals. Some eavesdropped on the conversations of others, hoping to get inspiration for their next meme. Others sat down to decadent dinners financed by their “Declining Daddies.”

ITS, which helped students get work done without violating the academic honesty policy, died Dec. 22, 2017, of unknown causes. He was 48.The death was confirmed by Connections Cafe, Gleason Library, and the UR Tech Store.

“I’m still in a state of shock,” Gleason told the Campus Times. “ITS was like a brother to me. His loss is weighing me down, probably because of all the additional students who now come to me to get work done.”

Some students found the death of ITS suspicious, with several suspecting that I. Zone, whose hiring was recently announced by the University, had killed ITS.

“In response to student concerns, we have conducted a thorough investigation into the death of ITS,” a Public Safety official said in a statement. “After a thorough autopsy by doctors at Strong, it was determined that ITS died due to a combination of asbestos and carelessly standing in the path of construction equipment. We do not plan to press charges at this time.”

“There’s no way ITS wasn’t murdered,” junior Cam Pewter said. “I saw him the day before he died, and he was perfectly healthy and attentive. Construction equipment, my ass.”

Others agreed that the Public Safety investigation was severely flawed.

“There’s no way they researched all the facts,” a student IT worker, who wished to remain anonymous due to having an affair with ITS, said. “For months, I heard my colleagues talking about how they were going to replace ITS with I. Zone. This wasn’t some accident. It was a premeditated murder done in cold blood.”

I. Zone was not available for comment due to ongoing surgical procedures.

While beloved by students, ITS was notorious for having bad Wi-Fi. Hundreds of students were incredulous that such poor internet quality could come from someone who had a close relationship with University IT.

“ITS was always so fickle with the Wi-Fi,” R. Duous ‘14, said. “One minute he would tell me, ‘UR Connected,’ then a few minutes later my laptop was no better than a glorified typewriter. It made me want to scream.”

ITS was born Res Irve Reading-Room in October, 1969, to University Head Librarian Ben Bowman and former University President W. Allen Wallis. He set the unofficial world record for the world’s largest birth of a new study space that year, since he had two levels and drew much attention as the son of two fathers, unheard of at the time.

In the following decades, Reading-Room would help students waste time between classes, set high scores on Slither.io, and stay warm place to wait for the next Gold-line bus.

Reading-Room changed its name to ITS after discovering itself in college.

Toward the end of its life, ITS was plagued by excessive computer loss and low levels of dry-erase markers. Despite this, it maintained a positive outlook on the future.

“I don’t see people who spend the entire night here as procrastinators,” ITS said in an interview in 2011. “Life will always have its hiccups, but as long as we keep our heads up and out of our phones, there’s always something to look forward at.”

Tagged: ITS Obituary
Lumi Schildkraut is a member of the Class of 2020.

By Ariel Wang on Feb 5, 2023
Primo envisions this technological advancement being integrated into classes and assessments in the future.
abortion