Vocal Point, YellowJackets sing their hearts out at Fringe Fest Live music is back, and what better way to celebrate than cheering on my talented friends and peers? After a virtual celebration last year, the KeyBank Rochester Fringe Festival returned in person this year after a virtual 2020 celebration due to the pandemic. With it came the triumphant homecoming of UR’s Vocal Point and YellowJackets a cappella groups to the Fringe stage. They performed on Saturday, Sept. 18, from 8:00 to 9:00 p.m. and again on Sunday, Sept. 19, from 6:30 to 7:30 p.m.

With the exception of the UR acapella showcase at Wilson Commons on Aug. 25 — in which each of five student groups sang two to three songs prior to auditions — this was the first public concert with a live audience in almost a year and a half for both Vocal Point and the YellowJackets, and neither group disappointed. The excitement of being back on stage and singing was visible both on the performers’ faces and in the way they held nothing back, giving 110% of their hearts and souls to the music.

In an effort to diffuse the concentration of people, the 2021 Fringe Festival spread the various events throughout Rochester. The University provided shuttles between campus and a few of the Festival spots, alleviating the burden of transportation for students. This particular concert was held at the new Dawn Lipson Canalside Stage at the JCC, which proved a wonderful location for a well-attended yet intimate performance in which the audience and singers could connect with each other, dancing and laughing together. A large tent covered the seating area and stage, adorned by string lights that created a warm, welcoming ambience. Despite the fact that it was an outdoor venue, the acoustics were fantastic — the sound system allowed for a properly balanced volume of soloist and background vocals that was audible throughout the tent.

The anticipation building prior to the start of the show was palpable; the entrance line extended from the gate to the parking lot as the audience listened to the groups’ sound checks and danced in place. Upon the show’s start, Vocal Point (UR’s only all-female a cappella group) kicked the night off with a vibrant cover of Ava Max’s pop hit, “Kings & Queens.”  During the last chorus, they added in some freestyle dancing, showcasing each of the members’ personalities and letting the audience know that they were in for an evening of fun entertainment. They elicited laughs from the audience, particularly during the ending chorus of “Potential Breakup Song” (originally by Aly & AJ) when the lyrics switch gears from being about a relationship breaking up to the couple making up. They showcased their range in genre when switching from a mashup including the upbeat “Dirty Little Secret” by The All-American Rejects to a slowed down version of teen sensation Olivia Rodrigo’s “Deja Vu.”  The women interacted with each other while singing, smiles lighting up their faces. They captivated us and had us dancing in our seats. 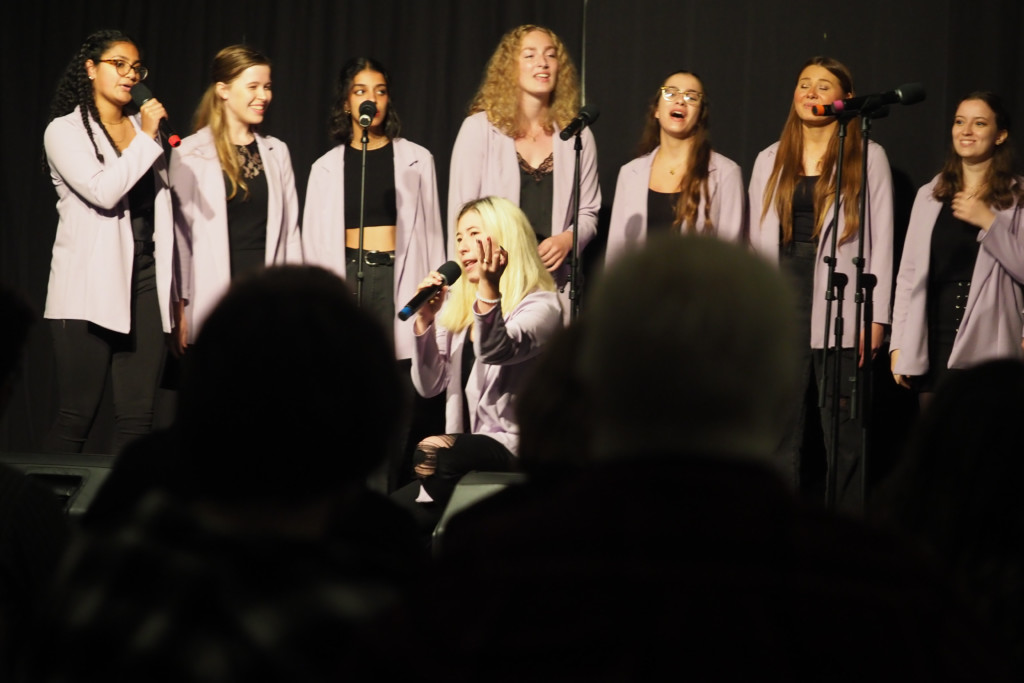 After half an hour, the YellowJackets (an all-male a cappella group) eagerly sprinted up the aisles and jumped on stage, keeping the energy flowing. They joined Vocal Point for a wonderful rendition of Labrinth’s “All for Us.”  Both groups’ voices blended very well together; the piece was evidently well-rehearsed. The beautiful harmonies, especially the opening chords built with the voices of every single singer on stage, explained why these two groups performed together and were able to complement each other. Following this piece, Vocal Point exited the stage, and the YellowJackets began their repertoire with a lively medley of Beach Boys tunes, including some synchronized group choreography. The Yellowjackets transported the audience back in time with a stunning rendition of “The Way You Look Tonight” by Frank Sinatra but also featured popular modern-day hits such as “Burn the House Down” by AJR and Shakira’s “Waka Waka (This Time for Africa).” During the latter, they invited the audience to stand up and join them in their dance, which everyone clearly enjoyed; many laughs were had as the audience attempted to maintain the rhythm of the fun piece. 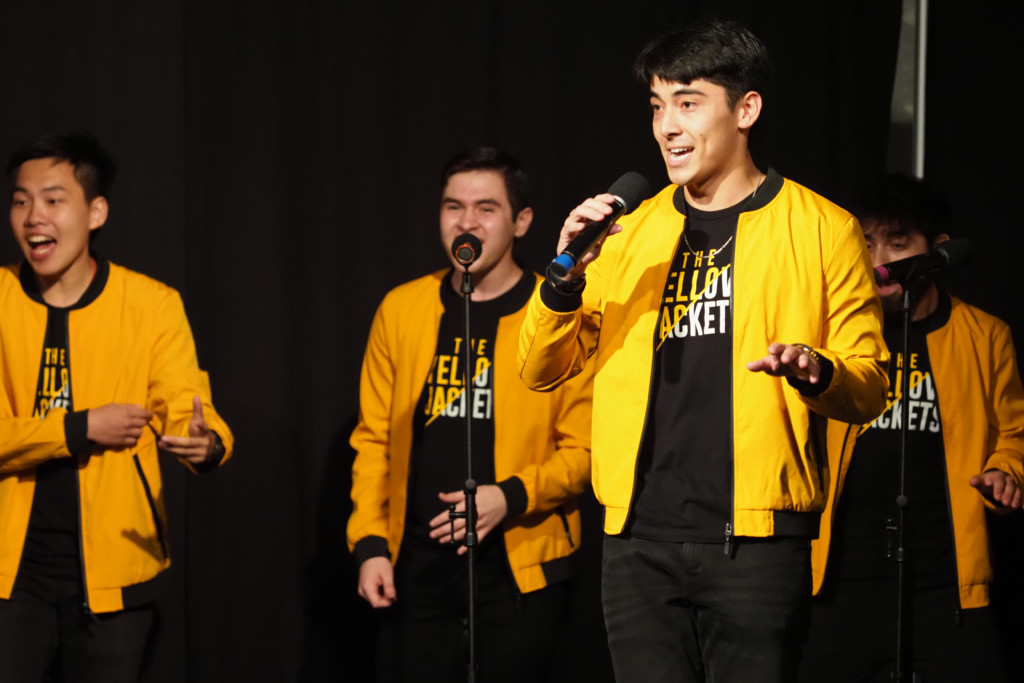 Both groups showcased their range in genre and utilized medleys, which is very characteristic of a cappella. Their beatboxing was strong to the point where I found myself having to pick out the beatboxers on stage to observe and see for myself that they were in fact only using their voices and nothing else to make these marvelous instrument-like sounds. Extremely talented soloists were comfortable on stage, interacting with the audience and using their body language to tell the stories their lyrics conveyed.  As they grooved to the beat, they were obviously in their element and glad that they no longer had to only imagine what performing live felt like. Assistant music director of Vocal Point and sophomore Alyssa Koh (who is also Opinions editor for the Campus Times) said, “Performing in front of an audience wasn’t something I got to experience prior as a result of COVID[-19], so getting to sing ‘The Feeling’ (my solo) and show off our group’s hard work with live, in-person response was downright euphoric.” Regaining some sense of normalcy in the form of live music was beneficial to the performers and audience members alike as we shared in this magic.

Although (as the YellowJackets demonstrated when they continued their concert tradition of introducing themselves to the audience) an overwhelming majority of the singers in both groups are majoring in a field outside of music, the level of musicality and natural and learned talent from the individuals was outstanding. Members arrange songs themselves, actively participating in the concert process from start to finish. They have a knack for performing, and their enthusiasm is contagious; one cannot help but enjoy themself when in the audience for these groups. Their passion is inspiring — I hope that all students at UR can find an activity to pursue that they enjoy as much as these musicians love performing.

Don’t miss the YellowJackets and Vocal Point on Saturday, Nov. 6, and Saturday, Nov. 13, respectively, as they return home to River Campus for their fall concerts.