From the Archives: UR’s Gates gave morphine its structure The most famous of the alkaloids naturally occurring in the opium poppy — the potent painkiller whose synthetic derivatives include heroin, OxyContin, Vicodin, and fentanyl — was first synthesized in UR’s Hutchison Hall.

In 1952, Marshall Gates Jr., then only a lecturer for the University’s Department of Chemistry, completed the first successful total synthesis of morphine at age 35.

Jack Kampmeier, a colleague of Gates, described his complex 26-step synthesis as “a triumph of scientific imagination.” The elegant synthesis garnered Gates his election to the National Academy of Sciences, invitations to lecture, and worldwide recognition in the chemistry community. It also earned him a promotion from lecturer to professor at UR. 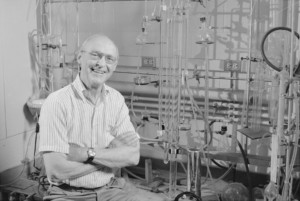 Gates was a distinguished professor at UR, winning undergraduate teaching awards and becoming the C.F. Houghton Chair of Chemistry at the University.

During World War II, chemists rushed to be the first to synthesize morphine, not in order to supplant the natural source (opium poppies) but to determine the exact structure of the molecule.

The real purpose was to conclusively determine the structure of morphine, and “traditional proof of structure then was an unambiguous synthesis, which was what we had undertaken,” wrote Gates.

In 1925, Robinson proposed a morphine structure, after degrading the molecule into recognizable, smaller compounds.

However, his proposal was only a hypothesis. Before the days of high-speed computers to process complex X-ray crystallography data and powerful spectroscopy techniques, the only surefire way to confirm a molecule’s structure was to build it from scratch.

So, Gates and his postdoctoral fellow Gilg Tschudi set out to do just that.

They were able to demonstrate that one of their synthetic compounds, containing the skeleton of the morphine molecule, was identical to a degraded form of thebaine (another naturally occurring alkaloid in opium). It was then they “knew with certainty that [they] were on the right track,” wrote Gates. 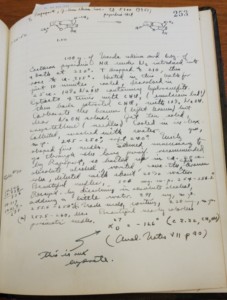 Gates’ lab notebooks, detailing his decades of chemical research, like this page from the morphine synthesis, can be found in Rare Books and Special Collections.

This synthetic breakthrough was the starting point for his later work, which focused on finding less addictive morphine substitutes, creating hundreds more compounds and obtaining 13 patents.

His work on opiates was not his only contribution to the chemistry world: he also served as the editor-in-chief of the Journal of the American Chemical Society, the premiere scientific journal for chemistry, from 1949 to 1969. Additionally, he mentored roughly 31 Ph.D. and 12 M.S. students, and 18 postdoctoral fellows.

While chemistry was to be his life-long purpose, it was not always his favorite subject.

In high school, chemistry was not the “intellectually fascinating and stimulating subject” he later found it. For him, the “theory seemed artificial and unsatisfactory” in the days before quantum mechanics was fully developed, as he described in his memoir.

Gates also proved a valued member of the faculty for undergraduates; he was awarded the Edward Peck Curtis Award for Excellence in Undergraduate Teaching in 1967, and appointed to the Charles Frederick Houghton Chair in Chemistry the following year.

In his private life, he was an avid competitive sailor and skier, even owning a sailboat named Cutty Sark. He also knew glassblowing, often making his own glassware for his laboratory.

In October 2003, Marshall Gates passed away. His 1995 memoir describes his work on the morphine synthesis as “by a considerable margin the best and most important work I’ve ever done.”

He ends with: “I have now reached my eightieth birthday and I do not suppose much of real interest will happen to me from now on. If it does, I’ll supply an addendum.”

Tagged: drugs morphine organic chemistry
An Nguyen is a member of the Class of 2022.