From Buzzfeed to Broadway lighting, the first ever ToddX brought an array of alumni from the entertainment industry to Todd Union in a rapid-fire 24-hour showcase of discussions, workshops, and masterclasses.

Organized by Nigel Maister, Artistic Director of the UR International Theater Program, ToddX kicked off with a panel discussion featuring five of the speakers. All speakers were past students of Maister, who’s worked in the International Theater Program for 23 years. “There’s a real cross section of people we invited back,” Maister said. “I wanted to get people from different eras of the theater program […] I wanted a cultural diversity, a diversity of men and women, a diversity of what they were doing.”

Jeff Englander ‘10, a chemical engineering graduate who now works as a lighting designer for Broadway shows, led a workshop on automated moving lights. He made the switch from STEM to the arts his junior year at UR, when he visited various engineering firms as a part of a required course and realized he wasn’t passionate about the drab prospects of a career in chemistry. “Maybe I should be the guy building the scenery instead of the guy in the windowless office upstairs,” he said. “Those cubicles looked miserable.”

Maister emphasized the relationship between STEM and the arts when planning ToddX. “Something the University recognizes, and recognizes with incredible pressing attention, is that the ‘A’ in ‘STEM’ is missing — the arts,” he said. “Students who have experience in the arts and the humanities fare better and have greater chances of success than students who do not[.]” 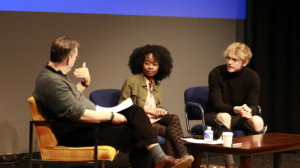 Actors Liz Femi ‘02 and Andrew Polec ‘12 represented younger voices with their panel, “The Young Actor’s Life.” Polec, who just finished playing the lead role in a London company production of “Bat Out of Hell” (a musical by Meat Loaf), said he landed the main role after being rejected from “The SpongeBob Musical.” “If you’re not nervous about what you’re going for, you probably have a better shot at doing what you’re doing in the room.”

Femi, who’s working in L.A. on a Netflix original called “Ratched” (a prequel to “One Flew Over the Cuckoo’s Nest” about Ken Kesey’s character Nurse Ratched), talked about the representation of women of color in media. “People have trouble trusting that,” she said. “I’ve passed on stuff that’s insulting and racist, but you’re always negotiating propelling your career with these people and being an artist of integrity.” 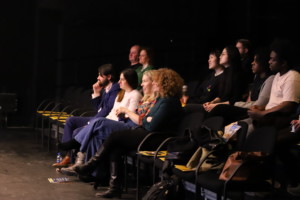 The discussions were filled with anecdotes about awkward brushes with fame. Wardrobe supervisor Alex Rozanski ‘11 has seen many television personalities in the nude, and once accidentally punched Seth Meyers in the throat while fixing his tie backstage. Todd Theater typically puts on three shows per semester, and ToddX was organized to replace this spring’s first production. “Cardenio,” one of Shakespeare’s lost plays, was originally supposed to be produced by Malaysian director Ed Iskander, but had to be cancelled because Iskander was denied his visa. The speakers also touched on the groundbreaking narratives performed in Todd Theater, relating to each other with stories of six-hour long productions filled with nudity and crass language. “Theater offers something deeply humanistic in its approach to the world,” Maister said. “Show up, do the work, and be open.”

By Alyssa Koh on Jan 29, 2023
It’s not often that you hear someone cite Kim Kardashian as their biggest inspiration for going to law school.
abortion