The self-proclaimed “best, most powerful, and only step team on campus,” as one member of Xclusive put it, asserted “attitude, arms, power, and precision,” while stomping onstage. Xclusive backed up those words with a high-octane synchronized performance.

The eight other groups that competed in “Stomping Through Dimensions” challenged Xclusive’s home advantage. Sponsored by BSU, the event filled Strong Auditorium with members from the greater Rochester community. The show kept the audience enthralled with dynamic, electrified energy throughout the four-hour performance. Two girls and their tiny brother held up their homemade sign for me to see. The sign, scrawled in bright crayon,  read, “Dance good, we love you so much!” Nearby, two girls chanted their high school friend’s name when she took the stage in the final dance. On the balcony, the step performers themselves stood to watch the other teams perform, singing and cheering for their competitors. 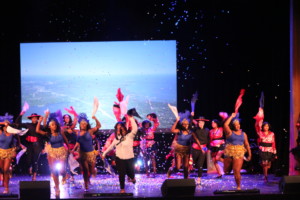 The show attracted so many friends and families to campus that it started half an hour late, due to long ticket lines and lobby traffic. “We want to see respect and responsibility,” the announcers said the DJ ramped up the excitement with energizing music. “Those are the two values of our University.”

Distinguished Dynasty,  a team that won in prior years and featured dancer King Bey stepping to a video of Beyoncé, kicked off the event. This galvanized the audience’s pulse, and fans cheered for other returning step teams like Legacy Step Team and Elite Empire. Legacy stepped onstage to Beyoncé’s “Formation,” wearing the iconic black hats featured in her music video, while a remixed video from “American Horror Story” played on the screen behind them. Wilson Pearls, the team that ended the show, has been competing for twenty-two years and took us on a journey around the world with an elaborate set featuring cardboard cutouts of globes. The costumes and music highlighted cultural steps from the West Indies, Japan, and Spain. 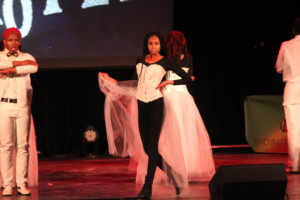 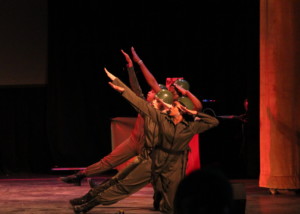 Family members rallied for first-time participants, like the Stepping Saints, and for younger step dancers, like the Silent Assassins. Silent Assassins won first place for the junior division. “We talk with silence; we speak with action,” a middle schooler chanted.

The team with the biggest audience response was the League of Extraordinary Steppers. Starting their performance with a clip from “The Purge,” they swept down the aisles with light-up masks and climbed on stage with outsized confidence.

Even during intermission, energy remained powerful. While the judges (all alumni or employees of the University) discussed the winners, members of the Multicultural Greek Council strolled onstage.

First place for the senior division was finally given to the League of Extraordinary Steppers. The team flocked the stage, hugging and shouting with disbelief.

Overall, it was evident through the performances that the step teams came prepared to deliver a performance as memorable as it was in-step.

“We got a chance to see these teams practicing backstage,” the announcers said at the beginning of the event, “and they are ready.”

Tagged: BSU competition step dance
Olivia Alger is a member of the Class of 2022.