March 31 presidential debate gives UR a look into SA hopefuls While the candidates explained the ideal relationship between student government and administration, a small mechanical whirr could be heard from the audience. Slowly, bubbles started to rise, filling the already-electric air of Hoyt Hall.

Over 100 students gathered to witness the first in-person SA Presidential Debate since 2019. The debate was one of the largest in recent memory, with four of the five presidential tickets present, nearly matching 2016’s record breaking six-ticket field. Cole Senecal and Michael Hardy, both sophomores, were unable to attend.

The debate ran for an hour and a half, covering a variety of topics including how candidates plan to communicate with the student body, the ideal relationship between administration and SA, SA’s overall effectiveness, and top issues affecting the student body.

For many students, the debate was a great way to try and see if any of this year’s candidates embodied the perfect Rochester SA candidate.

“I think that a good candidate is essentially composed of passion for the school, passion to move it forward past from where it is, and absolute disdain for the dining halls because if you like those things you have not tasted a single morsel of flavor in your entire life,” sophomore Isabella Kelly told the CT. 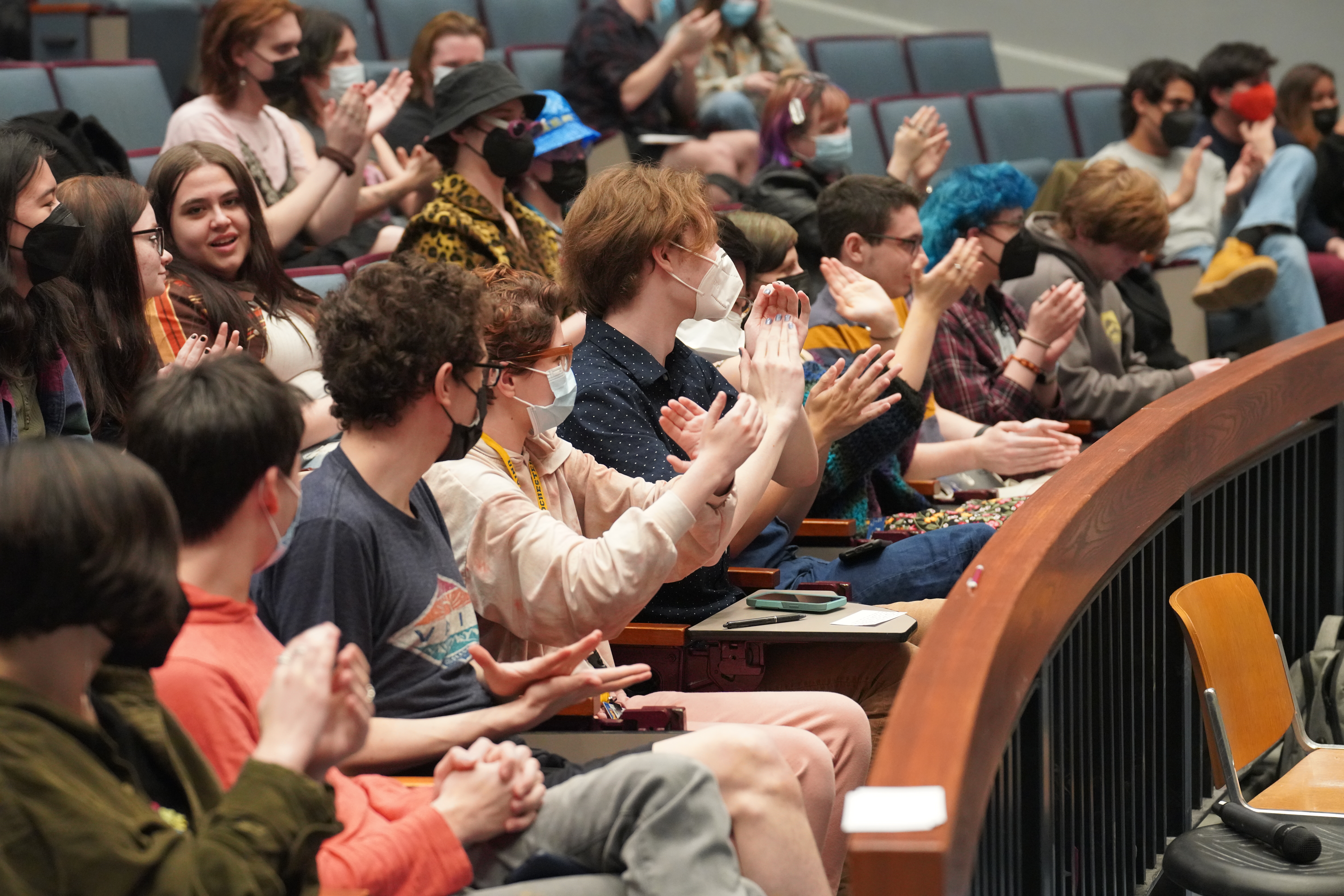 Students applaud in between candidates at the March 31 debate. Courtesy of Bankrupt Photographer, Staff Photographer.

The Arnold/Abbey ticket, run by first-years Sage Arnold and Finn Abbey, easily stood out from the three other tickets in dress. Presidential hopeful Arnold was dressed in a French maid outfit while Abbey, prospective VP, donned a t-shirt and jeans. Arnold cited the Transgender Day of Visibility (of which was on March 31) as part of the inspiration for the outfit, saying, “We love our trans friends, including myself. You can’t help but notice, I am the most visibly transgender candidate up here.”

These candidates often gained the loudest applause from the audience by putting a humorous spin on many responses: advocating to decriminalise sex in the library, lower Hillside prices through “nationalization,” liquidate the Business Department, and use incoming first-years to expand the tunnel system. They also emphasized their ability to get students not typically interested in student government involved with SA through their use of “unconventional tactics.”

“I want to kinda look at [SA] like when your friend says that their car has a top speed of 30. Let’s see how fast this baby can go! If we are not sure we can do anything, let’s set our sights high,” Abbey told the audience to a laugh. “If you want to win people over in student government by doing something, you don’t aim for the small stuff, you aim for something big that’s unavoidable, you can’t ignore it. Like ripping up the Wilson Commons quad and turning it into a community garden. No one will say that the student government can’t do anything when they see that.”

When asked to discuss qualifications, Abbey mentioned that he unsuccessfully ran for Vermont State Senate in 2018, winning over 3,700 votes during the democratic primary. 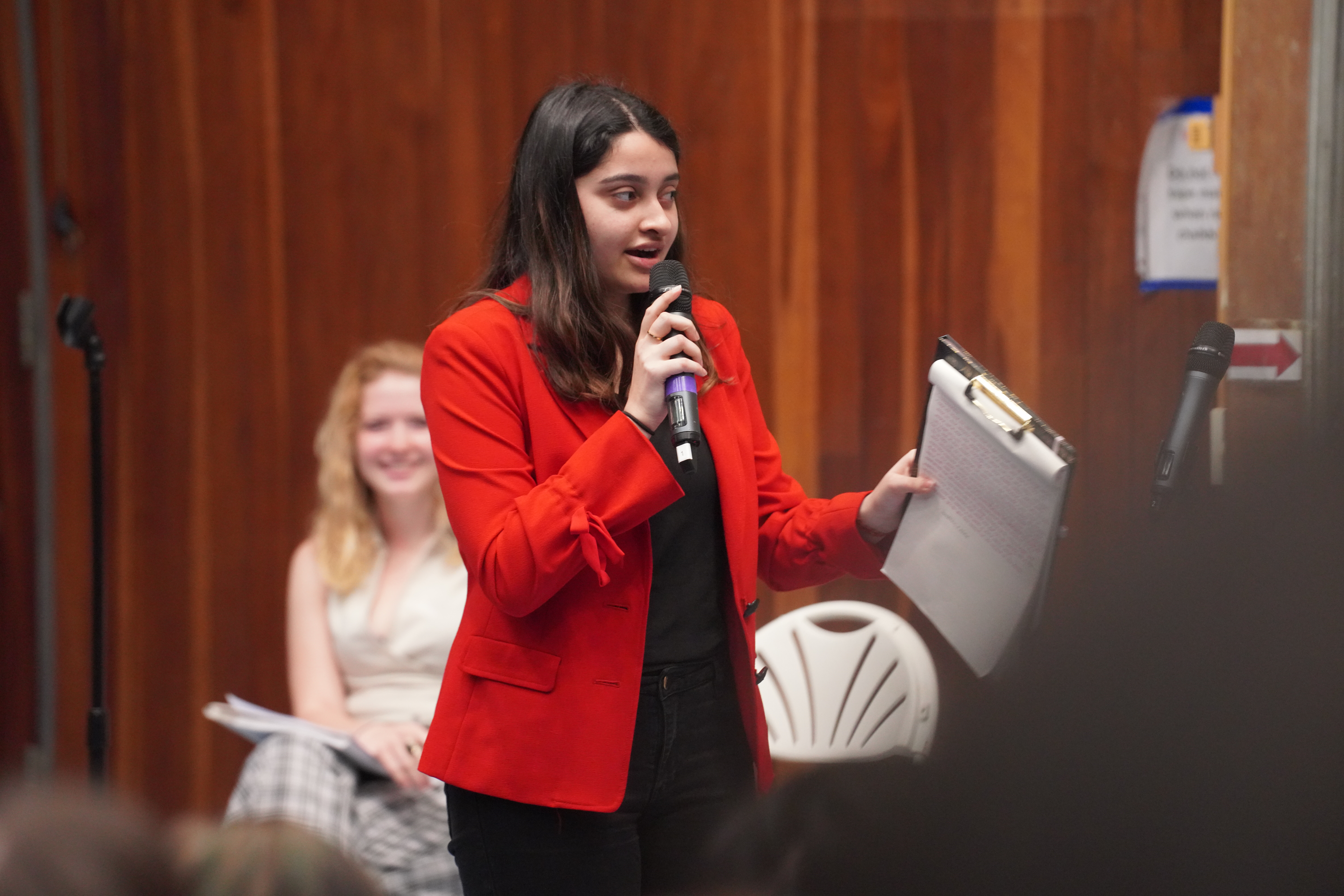 Adrija Bhattacharjee emphasized that she is the only woman of color running for SA President.
Photo Courtesy of Bankrupt Photographer, Staff Photographer

Sophomore candidates Adrija Bhattacharjee and Sybilla Moore also frequently drew significant applause while discussing their goals of working to change SA’s bureaucracy, hold frequent town halls with students, and provide more funding to student services, among other goals. The candidates said they see the bureaucracy “both in SA but more importantly in administration” as the biggest challenge moving forward, and hope to shift the perception of SA to be that of a student union, as opposed to a government.

“I’ve already made connections with most members of administration,” Bhattacharjee told the audience early on. To applause, she continued, “The moment I get elected into this office, I will go into a meeting with President Mangelsdorf and not be like, ‘Hi, how are you doing?’ I’ll be like, ‘what’s up?’ because I’ve already been here, I’ve already had these conversations, I’ve been advocating on your behalf ever since the moment I got to this school […] At the end of the day, if the administration tells me no, it’s going to fall on deaf ears, because I don’t take no for an answer.”

Both Moore and Bhattacharjee have previous SA experience, with Bhattacharjee serving as a current senator. Bhattacharjee also emphasized that she is the only woman of color running for SA President. 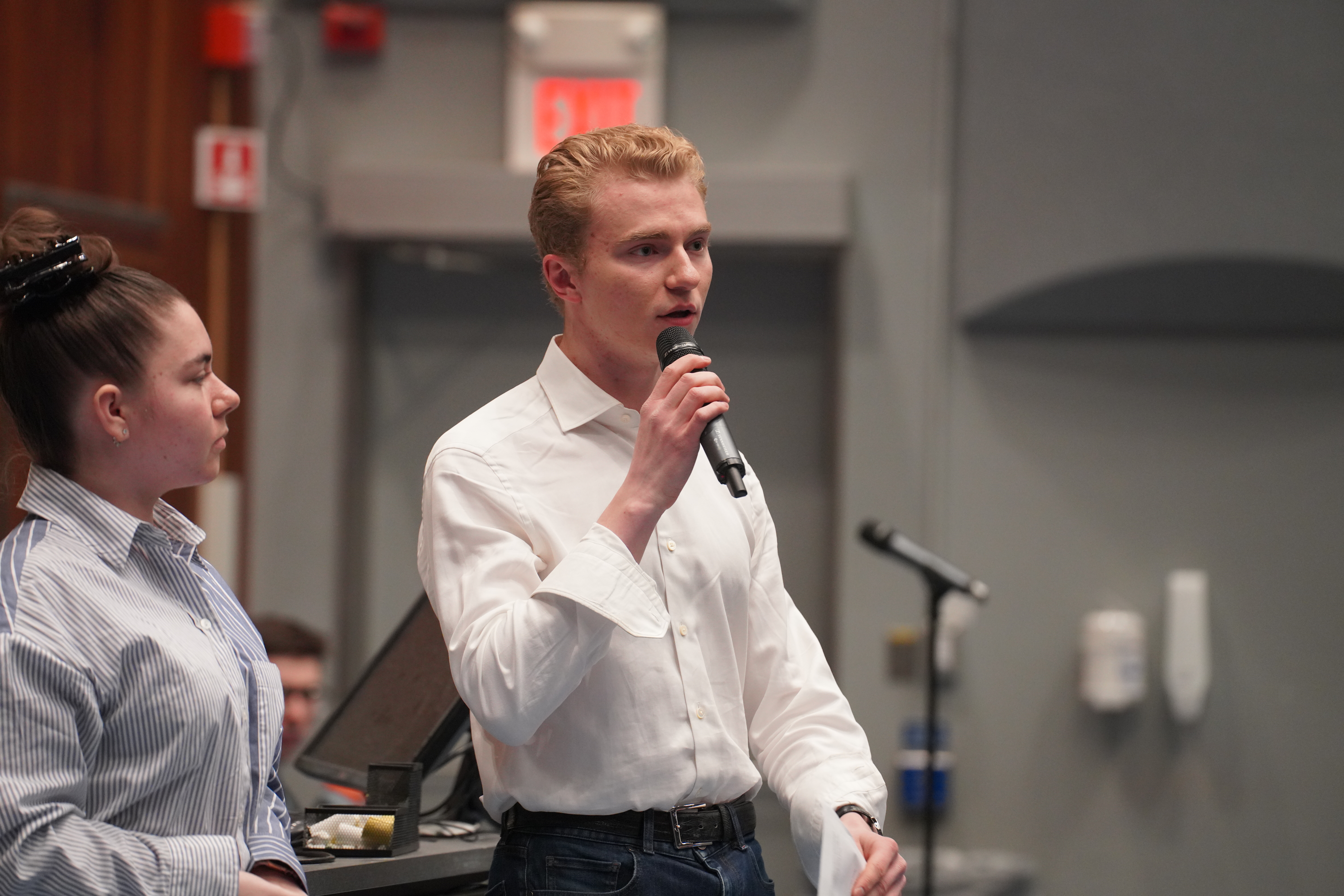 “We should be assuring that there is structural support to those clubs, and financial support, because at the end of the day it is very difficult to advocate for anything if you simply don’t even have funds to print flyers,” Sorokin told the audience.

The Sorokin and Edelstein ticket is the only ticket which crosses class years, with both candidates in a different graduating class. The ticket hopes to be more representative of the student body by being able to pull from different class years.

Juniors Abhinav Singh and Matthew Cosentino argued that due to not being previously affiliated with SA, they would bring an outsider’s view and offer a new approach.

“We are two outsiders with outside perspectives on what doesn’t work and what works,” Singh told the audience. “Coming at this with an outside lens, this isn’t a naive kind of notion where we are just going to be like, ‘Let’s make some big change’ — we understand what we have to do, what we want to do, and the avenues and processes that we are going to take to do it,” Cosentino added.

The Singh/Cosentino ticket pledged to expand mental health resources, noting it as the most pressing issue on campus, and hoped to get UR to release a full breakdown of its budget. The ticket also hoped to reallocate some funds which currently go towards Public Safety. 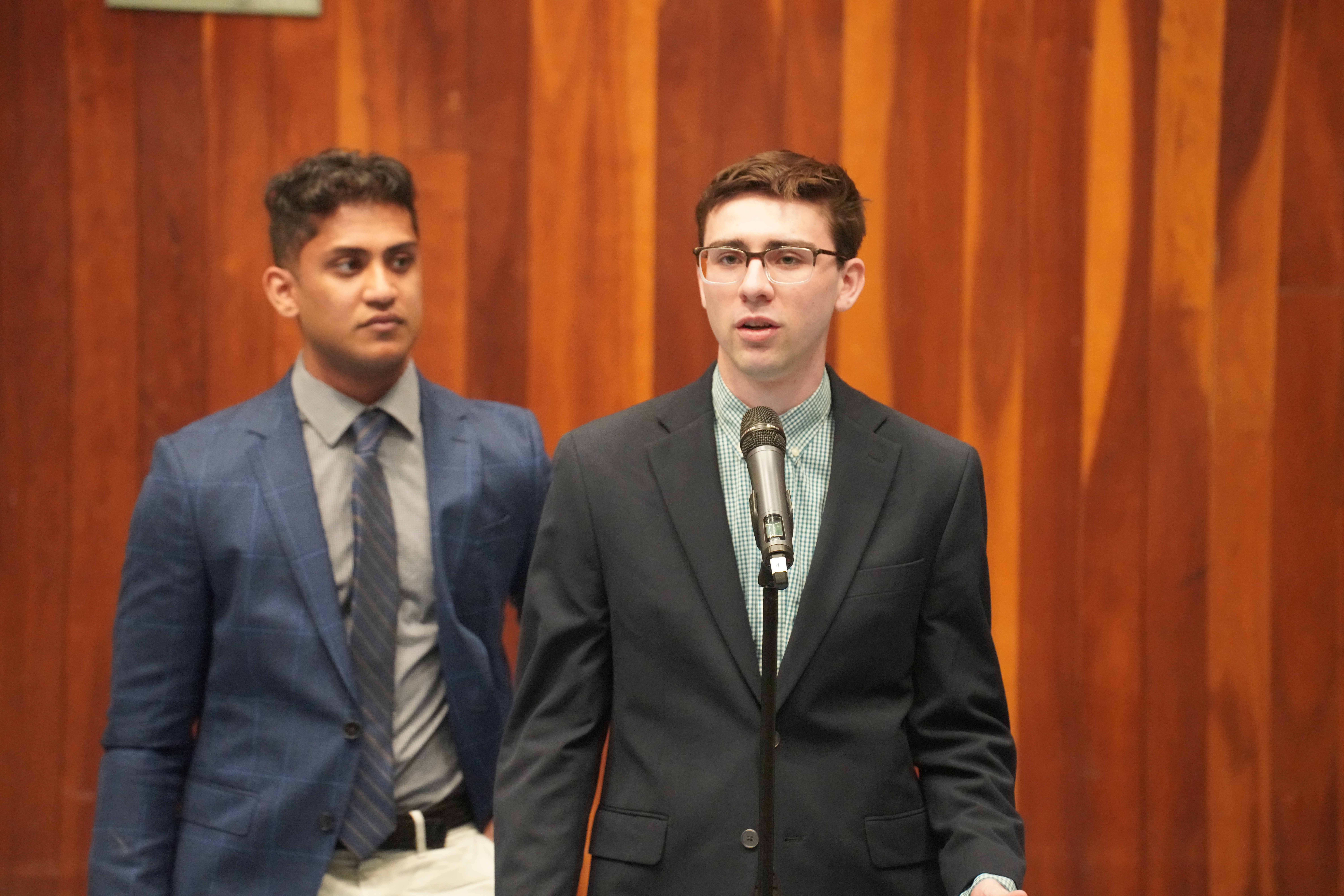 The debate was moderated by Dean of Students Matt Burns and ACJC Chief Justice Sam Smith. The debate started by allowing each ticket a two-minute opening statement before diving into a series of both pre-planned and audience questions. Students were able to submit questions online in advance through a form or during the debate by writing them on index cards and passing them forward to the moderators. The debate closed with a rapid fire round where each candidate was given 15 seconds to answer a question to help show the candidate’s personality.

“It was really nice to have [the debate] live again, it makes a big difference,” moderator and Dean of Students Matthew Burns told the CT. “There is an excitement to being live, and I think some of the candidate’s passion and some of the humor wouldn’t have come out over Zoom the same way it does live.”

Students left the debate happy to have gotten to know this year’s candidates in depth.

“[It was] very entertaining but also very informative overall, I thought,” first-year Lydia Faldowski told the CT. “It was a nice change of pace from normal events like that, where it’s normally just very serious the entire time — I liked the juxtaposition between the more entertaining candidates and the more serious, intense ones.”

“I think having a mix, the range of humor, and kinda walking in and out of that was a nice touch, I thought it kept people engaged,” first-year Joseph DiGrandi told the CT. He later added, “I’m glad we were able to have serious moments despite that, so the range was very important to me.”

Candidates’ full platforms can be found online and the full debate can be watched on YouTube.

Tagged: Debate SA Elections SA Race
Henry Litsky is a member of the Class of 2023.