They made their demands directly, in-person, in 34-degree weather.

They demanded the release of DPS’ budget and disciplinary records, and that DPS cease responding to mental health calls, instead replacing the position with a trained mental health emergency response team.

By the end of the hour-long discussion, Mangelsdorf and Fischer had committed to holding serious discussions including representatives of the student group, particularly about their requests for a new mental health emergency response system and budget transparency.

“We know words mean nothing without action,” the UR Abolition Coalition (URAC) wrote on Instagram, “so we look forward to holding the administration accountable.”

They added: “We hope this occupation was a powerful reminder that direct action works and that coming together as a community creates change.”

URAC began occupying the lot around 3 p.m., bringing sleeping bags, tents, and blankets. They remained there until early Sunday morning. In the occupation’s first hours, the group of about 20 was writing slogans like “Abolish DPS” in chalk and hearing talks from professors — as well as a community member — who visited.

There were more tense moments later in the evening, first between students initially blocking DPS cars from exiting the lot and DPS officers, and later between students and the two occupants of a pickup truck flying a Blue Lives Matter flag repeatedly passing the lot. By the time that confrontation de-escalated, Fischer had arrived. 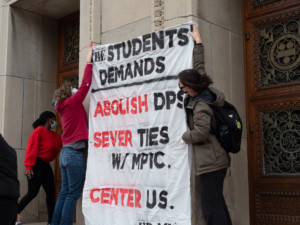 Several spoke, wiping down the mic in between speeches. After a speaker read URAC’s list of demands, senior Amina N’Gambwa emphasized the demand that the University implement a policy barring DPS from responding to mental health calls. (Free the People Roc has been pushing for a similar law in regards to the Rochester Police Department called “Daniel’s Law.”) N’Gambwa also emphasized the demands for budget and disciplinary transparency.

Senior Efua Agyare-Kumi — former Managing Editor of the Campus Times — spoke about DPS’s history and gave a brief history of Black activism at UR.

“College campuses across the country have histories of activism and college students as change-makers,” junior Indy Maring said towards the end of the rally. “So we have to step into that role as college students.”

Not long after, marching began. 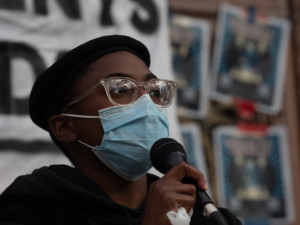 The demonstration moved from Rush Rhees to Susan B. Anthony Residence Hall where sophomore Elvis Vasquez read his poem highlighting the racist divide between the River Campus and the 19th Ward. At the same moment, UR alumni Jerry Rugley and Jason L. Cunningham walked up to the protest and later briefly spoke to the demonstrators.

“Campus security would stay by the footbridge to make sure ‘the others’ wouldn’t come across,” Rugley told the crowd, recalling his own experience of the divide Vazquez described. Rugley added that campus security would frequently ask him to present his ID to prove he was a student, saying, “The reason they asked me was because of the color of my skin.”

Demonstrators continued marching through campus chanting “Out of your dorms and into the streets!” and “Disarm! Disband! Free them all! Free the Land!”

They arrived at the Public Safety building at 2:54 p.m. The marchers soon spread out to block the entrance and exit to the building’s parking lot.

Professor Josh Dubler started the planned 24-hour occupation with a 20-minute speech in which he discussed the trend of college security departments increasingly resembling police forces.

Following the speeches, students began chalking the ground and preparing for the night, while playing music. Dinner was delivered, supplies were dropped off, and tents were pitched (some of them in the lot exits). It was a bright day when they began, but the sun set before 5 p.m., and the cold worsened. Tensions stirred a few hours later. 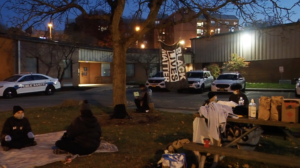 As the sun set, an already cold day turned into a frigid night for demonstrators. Henry Litsky, Photo Editor

The first conflict began around 7:38 p.m. when a DPS car started moving towards one exit, and several students stood in its way, an encounter caught on tape by one of the officers.

Things remained in a stalemate for a while, with Dean of Students Matthew Burns later arriving at the scene and talking with DPS officers and student activists. “Students can protest,” Burns said, but added that he wanted to make sure they were aware of violations that may arise due to blocking the exits.

Burns told the students they could be subject to a felony charge if DPS was prevented from responding to a serious emergency. Students decided about an hour into the standoff to let two cars exit the lot, just as two MERT workers dropped off blankets for the demonstrators. 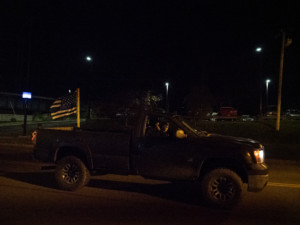 During one of the drive-bys, Maring sprinted after the truck and got its license number, which they gave to the DPS lieutenant in the lot.

After their fourth drive-by, the driver and passenger of the pickup parked and stood down the road carrying the flag. Maring and a small group of demonstrators went over to confront the two men. At one point, one of the men accused the demonstrators of supporting terrorism.

By the time the conversation ended, Maring had explained that the protest was in regard to the specific demands of DPS. The two men decided they had no qualms with the cause, even voicing support and returning with the protestors to the lot, where DPS commissioner Mark Fischer had already arrived.

One of the major points of the discussion was the way that uniformed officers could worsen the situation when responding to a mental health crisis.

“No matter if there’s training or not,” senior Antoinette Nguyen said, “when DPS officers come dressed as police officers, it does more harm than ever good.” Fischer said that the uniforms have sometimes had that impact in his experience.

Fischer said that DPS officers were often needed for violent mental health patients. “Unfortunately, you can’t talk everyone into calming down,” he said. “And that’s just the reality of the world.”

Nguyen criticized Fischer’s description of violent mental health patients, saying that often patients are under “extreme duress and it only is worsened by violence workers.”

“I think it shows your lack of compassion for these people,” she added.

As the discussion continued, Mangelsdorf arrived. One student described how the presence of an armed officer could worsen the situation during some mental health crises. “[When] you see an officer knock on your door with a gun, that does not make it better,” the student said, adding, “I have had personal friends who have told me: ‘DPS came to my room, and I am traumatized from DPS responding to my mental health crisis.’”

Mangelsdorf pointed to the positives of DPS and said that some students have spoken of great experiences with DPS. “I have gotten letters from […] students who have made suicide attempts, [saying] they were thankful that DPS saved their lives.”

“Your option is not DPS [responds] or no one responds to a suicidal student,” Maring said. “There can be an option where certified mental health counselors, psychiatrists, psychologists can respond to a student in need.”

Mangelsdorf agreed that representatives from URAC should be involved in discussions about changing the mental health emergency response system.

Demands for budget transparency reached a similar conclusion of commitment to further discussion, with much of the evening’s conversation focused on how detailed and wide-ranging such transparency would need to be.

Fischer and Mangelsdorf left around 10:30 p.m. The demonstrators remained in the lot until around 6:00 am.

When asked how they felt after the administrators left, Maring repeated a chant from the marching earlier that day.

Editor’s note (11/20/20): A previous version of this article did not mention Nguyen as one of the demonstrators quoted. We’ve since added her in.