Year of the Pig: Chinese New Year Cook Off Despite nationwide class cancellations due to the frigid weather, UR students are still going strong. As February opens a new chapter, the Chinese New Year festival approaches with warmth and festivity.

In Mandarin, Chinese New Year is called “Chun Jie,” an important festival where families reunite and spend time together. Despite the vivid cultural differences between the North and South of China — in the North, people eat dumplings, while hot pot is more popular in the South — enthusiasm and happiness is celebrated throughout the country.

On Friday, Feb. 1, the Chinese Cook Off was held to celebrate the upcoming Chinese New Year, organized by the Chinese Student Association and the Paul J. Burgett Intercultural Center. It was initially designed in the format of Gordon Ramsay’s “MasterChef.” Each group (four of them competed) made one dish, and judges tasted and decided the best one. The peaceful and relaxing atmosphere in the kitchen made the event feel more like a family gathering. Red tablecloths and a Chinese show playing on TV created a Chinese New Year ambience, which was spirited despite home being far away. Groups made typical Chinese dishes like steamed fish with minced pork, sirloin with tomato, and of course, dumplings. 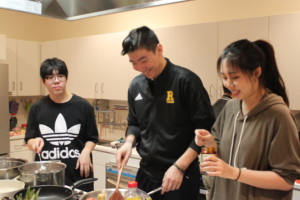 “[The] friends I made here make me feel less homesick,” first-year Peter Fan from Suzhou, China, said, “but honestly, I do miss getting red envelopes and amazing food back home.”

While Chinese New Year is a celebration of family and wishing for a fresh start and harvest in the New Year, it’s also when children receive “red envelope” money from parents, grandparents, and relatives. In addition, there are many superstitious beliefs and rules. During the week of Chinese New Year, haircuts, throwing out garbage, sweeping floors, and turning off lights are all prohibited.

In the Chinese Zodiac calendar, 2019 is known as the “year of the pig.” Pigs are known to have a beautiful personality and are blessed with good fortune in life.

Tagged: china dumpling New Year zodiac
Kyohimeko Ka is a member of the Class of 2022.