Down to their last slice, ‘Pizza Prty’ looks back On the evening of May 1, two weeks before the final broadcast of their weekly music show “Pizza Prty” on WRUR, seniors Carrie Taschman and Toby Kashket are dealing with a more present issue: Kashket cannot stop giggling on air.

Moments earlier, while a song was still broadcasting, Taschman had been scrolling through old text messages from their beginnings at WRUR when she stopped to read one aloud.

“You used to text me all the time, ‘Don’t forget to listen to my show,’” she said to her partner, prompting Kashket to concede her past neediness (and constant usage of the term “cool beans”) and then realize, mid-laughter, that the song just ended — time to talk.

Once on air, Kashket manages to stifle her laughter — “You’re listening to the ‘Pizza Prty’ on WRUR. That song was ‘Leisure Bees’ by Tacocat, and that song is about being a bee” — but starts to crack when she says, “And just in time, the bees will awaken soon.”

After they finish talking and the next set of songs begins, Taschman and Kashket are able to get their laughs out in the privacy of the Todd Union recording studio.

“We’ll do this once every three weeks,” says Taschman. “We’ll laugh too hard to talk. It’s not good.”

“Pizza Prty” — pronounced “Pizza Party” — was created by Taschman and Kashket as first-years at UR, in the spring semester of 2015. They continued to do the show together throughout their college careers, taking a yearlong hiatus in the fall of 2016 when Taschman spent a semester studying abroad in Copenhagen.

During that time, Kashket co-hosted a separate show, “Indie Festival,” before returning to “Pizza Prty.” (When asked what she would do if Taschman left to study abroad in a 2015 profile for the Campus Times, Kashket answered, “Slowly die in the studio.”)

Kashket and Taschman, who have been the WRUR general managers for the past year and a half, first met at lunch with a mutual friend and would run into each other at WRUR meetings.

In the first semester of their first year, both students hosted their own shows on the Sting, WRUR’s online platform. Taschman had a co-host on her show, but Kashket ran hers alone. As Taschman tells it, she was asked by Kashket to sit in on her show to keep her company. While there, Taschman noticed the similarities in their music tastes.

“I think the plan was always that we were gonna move to FM together,” says Taschman. “I don’t remember really talking about it though.”

“I feel like at first when we weren’t so close we were too nervous to ask,” adds Kashket.

The title and its misspelling of “party” is an homage to the song “Pizza Party,” by Vampire Weekend singer Ezra Koenig’s rap group, L’Homme Run. (“P-I-Z-Z-A P-R-T-Y / If you got a blunt, then we can get high” is a recurring line.) The song, which Taschman says is too “wildly inappropriate” for FM radio, was an early bonding point for the co-hosts.

The room they are recording in is heavily decorated. A bunch of album covers sit above the window, which looks onto another recording studio. A sign leaning against the window says, “WRUR is where the heart is,” with a drawing of a heart in place of the word. Kashket and Taschman insist it has all been there since before the “Pizza Prty.” 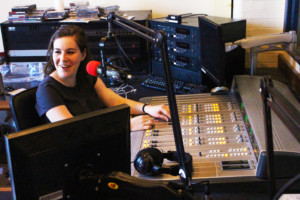 Taschman (above) is one host of “Pizza Prty,” which is airing its final episode on May 15.

An exception is a small whiteboard, with Kashket’s drawing of an emoji cat eating a slice of pizza and “Pizza Prty” in bubble letters. The identity of the artist who drew the background doodles is a mystery, and the whiteboard and its drawing have remained untouched for two years.

While regularity is something they cherish in their work at WRUR, Taschman admits that it can be exhausting.

“There have definitely been times where I have an exam the next day or whatever and I don’t want to be here,” says Taschman. “But it’s a time that forces us to sit around, be with a very close friend, and listen to nice music.”

“It’s like making yourself go to the gym,” Kashket adds.

Their final two shows are dedicated to playing their favorite songs to air on the program. When commenting on what the last show will be like, the co-hosts, who often speak in constant interjections and reiterations with each other, seem unsure.

“I don’t even know what I’ll be saying on our last show,” says Kashket.

“I’m gonna be blubbering,” Taschman responds. “We’ve been dreading our last show since like — ”

The final broadcast of “Pizza Prty” will air from 8 to 10 p.m. this Tuesday.

Tagged: fm pizza prty
Wil Aiken is a member of the Class of 2021.