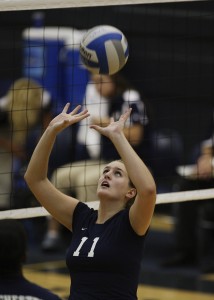 When the Volleyball team is on, they’re on. Like a well-oiled machine, single-minded and efficient, each and every player devotes all of her focus and abilities to the simple goal of taking home the victory. And when the machine is at work, it’s easy to tell that it’s running smoothly. Freshman setter Jackie Fluegel lofts balls above the net like clockwork for junior outside hitter Casey Larsen, who proceedes to drain it on undeserving opposing players.

The duo of middle blockers junior Katie Kao and senior Sarah Kauper support Larsen with even more firepower up front, while defensive specialists sophomore Lauren Bujincki and senior Katie Drinkwater keep the ball alive and in the air with dig after dig.

Alone, none of these players could achieve much, each player with her own specific skills on the court floor. When these talents are pooled, however, and when all minds turn only toward the task at hand, the potential for greatness is obvious.

Such was the case this past weekend at the Rochester Institute of Technology Invitational, as the Yellowjackets overwhelmed the opposition twice through pure grit and determination en route to a fourth-place finish in the tournament.

“Our team has a lot of potential to do great things,” Fluegel said, who as the team’s setter racked up 37 assists in a first-round 3-0 sweep of SUNY Brockport.

No one benefited more from Fluegel’s surplus of assists than Larsen, who translated 17 of Fluegel’s feeds into kills — an impressive feat that earned the spiker a spot on the six-person All-Tournament team.

“The team did a good job of passing rather consistently during the tournament and also of limiting our team errors, especially in attacking,” head coach Ladi Iya said.

Indeed, a balanced attack force lit up SUNY Potsdam for a second-round sweep, this time headlined by sophomore outside hitter Kelly Mulrey and Kao, who had 10 and seven kills, respectively.

The women displayed considerable dominance and athleticism in these rather easy wins. However, like most teams worth playing for and watching, the Yellowjackets showed their true colors when their backs were to the wall.

“I really believe that any match is winnable until it’s over,” Iya said. She proceeded to mention that it was with this mentality that her team “kept composure even in tight matches” against powerhouses Nazareth College and RIT.

UR kept visible frustration to a minimum in the team’s hard-fought 3-2 loss to Nazareth, rebounding from a first-game loss to win two in a row before dropping the remaining games in the best-of-five match. Mulrey set the pace with 18 kills in that game, while Larsen added 11 kills and Bujnicki 37 digs.

But the road ahead is a daunting one. Undefeated Washington University in St. Louis heads a list of immensely talented conference teams that also includes Emory University (10-1) and Chicago University (13-2). However, with a crop of hard-hitting outside hitters and middle blockers and a dependable defense, this year’s squad has high hopes.

“Conference play will be difficult,” Iya said. “But as long as we limit our mistakes and increase our repertoire offensively and continue to serve and pass well, we should be very competitive for the rest of the season.”

“When we play aggressively and with intent, I believe we can beat any team,” Fluegel said.