Todd Theatre’s newest production, “Marisol” — which was as disturbing as it was disorienting — is not for the faint of heart. Audience members are warned upon entry that the text explores difficult topics and that the performance includes mature language, sexual violence, and theatrical gunshots. But while some moments were difficult to watch, the surrealist show was a worthwhile, deeply moving, and all-encompassing theatrical experience.

The play follows its titular character Marisol, played by first-year Raina Plaisir. She is a young Nuyorican woman living in the Bronx and working as a copy editor at a science publishing company. At the start of the play, Marisol’s guardian angel abandons her to lead a revolution against a senile God who is slowly dying and “taking the rest of the universe with him.” Alone and abandoned by her own saints, Marisol must navigate the increasingly violent and confusing world around her. The moon has disappeared, cows’ milk tastes like salt, and Nazi skinheads are torching the homeless for fun. Before leaving, Marisol’s angel, portrayed by junior Cynthia Xiao, tells her, “You can’t trust luck or prayer or mercy or other people. When I drop my wings, all hell’s going to break loose and soon you’re not going to recognize the world — so get yourself some power, Marisol, whatever you do.”

Though there were brief moments of humor throughout the show, it was somber and deeply sobering in its relevance. The world that Marisol navigates is foreign yet unnervingly recognizable. Mentions of forest fires, plagues, and Nazi skinheads are perhaps more impactful to audiences watching the show today than they were in 1993 when it originally premiered. The text, written by Jose Rivera, tackles homelessness, ecological disaster, paranoia, mental illness, theology, sexuality, and civil disorder. Rivera, one of the premier voices in modern theater and film, was the first Puerto Rican writer to be nominated for an Academy Award. His exquisite talent shines through in “Marisol,” where he weaves foul-mouthed language and lyrical prose into an exceptional tale of love, loss, and personhood.

The genius of the show comes from the way in which it intricately weaves both the grotesque and the beautiful, the witty and the solemn. One of the characters says, in an impassioned speech, “The streets breed new species. And new silence. No spoken language works there. There are no verbs to describe the cold air as it sucks on your hands. And if there were words to describe it, Marisol, you wouldn’t believe it anyway, because, in fact, it’s literally unbelievable, it’s another reality, and it’s actually happening right now.” There are no conventional ways to effectively tell the “unbelievable” and real stories of the people that we meet in “Marisol,” but this is what makes its surrealist style even more powerful. The nonlinearity awakens a new kind of awareness in audiences when real events are too brutal or inconceivable to conceptualize, and this was heightened in all aspects of UR’s production.

The audience had to walk carefully around piles of garbage to get to their seats, and the chairs were divided into two sections facing each other as actors performed in-the-round. Artistic director Nigel Maister took advantage of all the vertical and horizontal spaces in the theater, including the catwalk. The actors took beautiful care in delivering performances that were both impassioned and earnest, and they deftly balanced wit and sobriety while tackling complex content. Coupled with the exquisite lighting, sound, and costume designs, audience members were fully immersed in the brutal celestial apocalypse of “Marisol.”

I watched the Sunday matinee performance, and when the show ended and the actors took their bows, the entire audience sat in unmoving silence. Even when the tech crew began to clean up, no one seemed ready to return to the world as they knew it. This experience perfectly captures the gut-wrenching and thought-provoking performance that is “Marisol.”

Marisol will be running Wednesday, April 27 through Saturday, April 30 at 8 p.m. Tickets can be purchased on the International Theatre Program’s website or at the door. 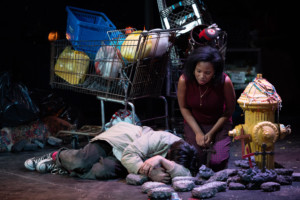