In June, a four-year lo 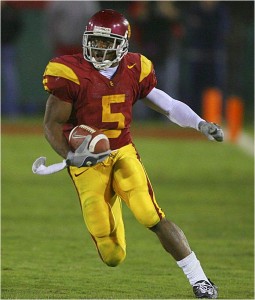 ng National Collegiate Athletic Association investigation found that Reggie Bush, a running back for the University of Southern California received improper benefits as a student athlete. Last week, this led Bush to surrender college football’s highest individual honor, the Heisman Trophy, which he received in 2005. This is all because two struggling sports marketers decided to give him and his family a limo, a rent-free home, hotel stays and a fancy new suit.

A new suit and a limo didn’t make Bush any better at football. They didn’t make him any stronger, faster or better at terrorizing defenses during his reign. He wasn’t any older or more experienced than the other players on the field. Bush was just plain old awesome at football. Just because he got a few benefits out of it — which he earned fair and square for being so incredibly skilled — didn’t give USC an unfair advantage during its 2004 championship season or Bush himself during his 2005 Heisman season.

Yet because of one person on their roughly 100-player roster, the NCAA has decided to strip USC football of all its wins from December 2004, including its Bowl Championship Series Championship Game. The rest of his teammates didn’t even do anything worthy of punishment! Furthermore, the NCAA has decided that USC is not allowed to award 30 scholarships to terrific athletes over the next three years. Who are the real winners from that decision? The NCAA? Integrity? Definitely not the 30 athletes whose academic and athletic prowess will now be for naught.

I’m not saying Bush didn’t break the rules, I’m saying the rules are stupid and the punishment is unfit for the truly minimal effects of his misdeeds. In reality, it’s the NCAA’s own fault for creating draconian rules that are beneficial for its members to break.

The NCAA props up a fledgling system in which it discourages being great at playing a sport. Thus, it’s no wonder why student athletes often leave school early, without a degree, for the higher benefits and pay of professional leagues. The NCAA’s own mission statement says that it is “committed to the highest levels of … excellence in the classroom.” Bush was still held to these high academic standards, and succeeded in passing those standards and earning his degree. If the NCAA really wanted to do everything it could to promote excellence in the classroom among student athletes, it would attempt to bridge the gap between the benefits of staying in college and joining a professional team. Solutions for this range from going all out and letting schools pay their student athletes, or simply allowing student athletes to hire agents who can garner sponsorship deals and benefits from any party outside of their school.

In the end, the punishment is too late to have any real effect on the one alleged culprit, Bush, in the matter. Bush already won the Heisman, was picked second overall in the 2006 NFL draft and won Super Bowl XLIV with the New Orleans Saints, all thanks to his extraordinary prowess as a running back. He still has all the prestige, money and sponsorship deals from those accomplishments, and USC still has all the income and popularity from their unstoppable 2004 and 2005 football seasons.

The 2005 Heisman voters gave Bush the second-most votes in history, presumably based on his impressive stats and exceptional ability to make anything happen when he has the ball. Simply put, he was the most outstanding college football player in 2005. “Improper benefits” or not, he earned the Heisman Trophy, and unless he was found to have had a competitive advantage over other athletes at the time, he deserves to keep that trophy.