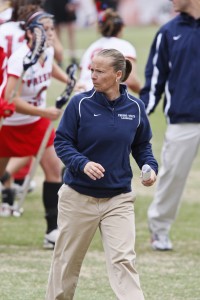 Sue Behme has always been a “warm weather person” and for the past two and half years, she has been enjoying life under the central-California sun. But starting in mid-October, that California sunlight won’t be a part of her everyday life anymore as Behme will be coming to the brisk cold of upstate New York to become the new head coach of the women’s lacrosse team.

Behme, who was the head coach for women’s lacrosse at the California State University, Fresno for the past two seasons, will be taking over the coaching duties from former head coach Liz Monte, who resigned in August. UR’s combination of athletics and academics was one of many reason Behme chose to coach the ’Jackets

“I wanted to work for and with great leaders who have a clear vision for academics and the entire athletic program,” Behme said. “[UR] will give me that. I feel as though I can make a difference in the lacrosse players’ lives and provide a great experience for them while supporting all of the athletic teams at [UR] and the academic community. ”

Behme stated that one of the main reasons she came back was to be closer to her family in Syracuse. With family being an important part of her life, it was an easy decision to come back.

Behme will begin in mid-October and will bring an impressive coaching résumé with her. Before coaching and starting the very first collegiate lacrosse program at Fresno State, Behme was the head coach for women’s lacrosse at Nazareth College for nine years.

As a coach of the Nazareth Golden Flyers, Behme led the team to six National Collegiate Athletic Association tournament berths and a 115-39 record.

She also earned Empire 8 Conference Coach of the Year five times. Behme had arguably her best season at Nazareth in 2006, when the team finished the regular season as one of only three unbeaten teams in the country with a record of 14-0.

“The fact that she … coached at the [D3] level before was important [to her hiring],” VanderZwaag said. “I can’t really stress enough how much it benefits us to bring in a coach with her experience, her body of work and how far [having a coach as experienced as Behme] moves you along the learning curve.”

The career Behme had as an athlete may be even more impressive than the career she has had thus far as a coach. She graduated from SUNY Cortland in 1993 after earning All-American honors in soccer once and lacrosse twice.

Behme had never even played lacrosse until she arrived at Cortland as a freshman. As a college senior in 1992, she was a member of Cortland’s national championship soccer team.

From 1996-97, Behme played semi-professional soccer for the Rochester Ravens and from 1999-2001, she was a professional mountain bike racer.

Behme finished off her athletic career as the assistant captain for the 2004-05 USA National handball team, where she was the starting wing for the team in the Pan American championships that took place in Sao Paulo, Brazil.

Behme’s never ending list of accomplishments extends off the athletic field as well. Throughout her two years at Fresno State, Behme’s team performed extremely well in the classroom. Her players compiled a team GPA of over 3.0 in both 2009 and 2010 and earned a perfect 1000 APR score, which is the NCAA’s rating of a collegiate athletic team’s academic performance.

“The No. 1 priority is academics,” Behme said. “All of my players in every program I have coached know that. Realistically, after graduating, these girls aren’t going to be professional lacrosse players. So I make sure my girls understand this, that academics always come first.”

Behme and her coaching staff at Fresno State also hosted free lacrosse clinics for local high school girls, coaches and umpires. Lacrosse is not a well-known sport in California, and as Behme was starting the first ever lacrosse program at Fresno State, she was simultaneously spearheading the effort to bring lacrosse to the high school level.

“When I got to Fresno State my staff [and I] helped start seven high school teams right away,” Behme said. “In the first six months of the clinics, we had 200 to 250 girls playing lacrosse by the end of the spring 2009 season [who] had never played before.”

The UR program has been in dire need of someone with Behme’s experience. The Yellowjackets have not had a winning season since 2002, when they went 14-4.

Additionally, there are only two seniors on the entire roster this year after four players quit the team last year. Behme is hoping to fix the program’s lack of consistency and stability.

“Putting together a successful team is a long-term process that never does end,” Behme said. “I’m focused on getting to [UR], have a plan in place, recruit well and build great team chemistry. With me coming in, I am not going to have a magic wand and immediately make everything turn around. But in time I know that everything will work out.”

The two returning senior captains of the team, defenders Maggie Stevenson and Charlotte Clements, are extremely excited about the selection of their new coach. Both said that they received emails from Behme immediately after she was hired.

“We’re excited to have someone with as great a lacrosse record and history as Coach Behme,” Stevenson said. “We hear she is a tough coach, but she brings in a strong tradition of winning in her previous teams. She has always had extremely … strong and fit teams in the past.”

Although Behme will not be enjoying the California sun for the time being, she is more than willing to make the sacrifice. For Behme, the thought of having to sport a winter coat for a while is second to the excitement she feels about taking over the lacrosse program.

“I am absolutely a warm weather person, period,” Behme said. “On my end, I’m definitely not coming back to Rochester for the weather, I will say that for sure. With that being said, me coming back to the area truly shows how important [UR] and the entire Rochester community is to me. And that’s the truth.”