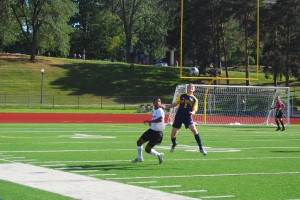 , the men’s soccer team tied the Hobart College Statesmen — who are currently ranked No. 17 in the nation — in an intense match-up. The two teams racked up a total of over 45 shots on goal and 39 fouls during the game, which ended with a final score of 1-1.

Both teams missed early opportunities to score the first goal — the Yellowjackets’ chance occurred only 13 minutes into the game. Senior defender Misha Carrel-Thomas headed a corner kick that was subsequently blocked. Freshman midfielder Sars Bowman took a second shot on goal that was also defended, leaving senior midfielder Steve Welles to bicycle kick the ball into the top crossbar.

The first goal of the game was finally scored in the 53rd minute when Welles took a shot from the top of the box. The shot bounced off a Hobart defender and into the back of the net.

The goal was Welles’ first of the season. For the majority of the second half, the Yellowjackets led 1-0. With just 10 minutes left in the game, a header by Statesman Ian McGarty slipped by sophomore goalie Scott Garfing who finished the game with six saves.

Garfing wasn’t happy with tying the Statesmen, but was confident in the team’s abilities.

“The quality that stood out was our toughness,” Garfing said. “It was a hard-fought game filled with plenty of rough tackles and trash-talking … but I thought we stayed above those things and battled the entire game. This game helps us realize that if we continue to play with that kind of intensity and focus throughout the rest of the season, few teams will be able to stop us.”

On Tuesday, the team had a war of attrition against Nazareth College which led to another 1-1 double overtime tie. The tie set their record to 4-0-3 overall.

The men’s soccer team is set to improve their momentum against Lycoming College at noon on Saturday.